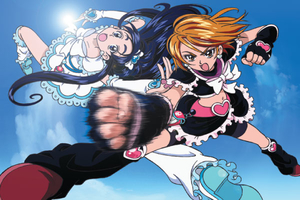 30min. 49eps. 2004 Nagisa and Honoka, two girls with opposite personalities encounter mysterious creatures that fled Earth from the evil Dotsukuzone. They are granted the power to transform into Super Heroes called PreCure to fight evil enemies. 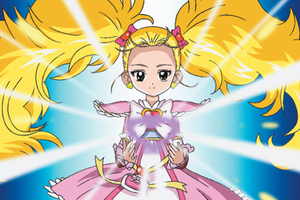 30min. 47eps. 2005 The evil and powerful Zakennar is back and PreCure rises again. Without them, the Queen may be lost completely! This time, Hikari and Pullun join the two girls. 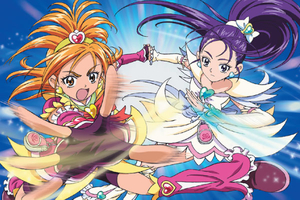 30min. 49eps. 2006 Junior High students Saki and Mai are transformed into PreCure and confront Dark Fall, the wicked power that seems to have taken over the "world tree" and the "seven springs." 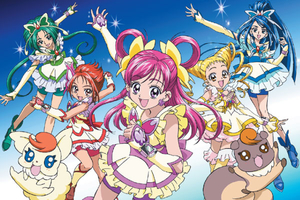 30min. 49eps. 2007 In the 4th series of PreCure, Nozomi, a cheerful student in San Culmier Junior High, along with her friends Rin, Karen, Komachi and Urara transform into PreCure to fight against the wicked power, Nightmare. Fighting as a team, they revive the Kingdom Palmier, which had been destroyed by Nightmare.

30min. 48eps. 2008 In the second season of the team of five PreCure members, Nozomi receives a mysterious letter from a boy. It turns into Rose Pact, allowing them to transform into PreCures after an enemy who is after the Pact attacks them. With the return of Coco and Natts, their new fight against evil power begins. 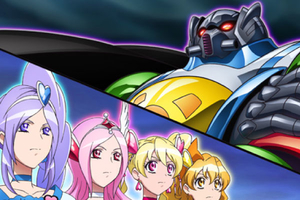 30min. 50eps. 2009 Love, a 14-year-old girl who loves to dance, and her longtime best friends Miki and Inori transform into PreCure to fight Labyrinth, the evil power that intends to control the world. Joined by Tart and Chiffon, from Sweets Kingdom in the world of fairy, the Fresh PreCures rise up to save the world. 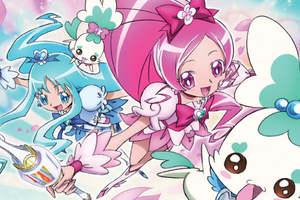 30min. 49eps. 2010 Tsubomi just moved and tries to overcome her shyness but finds herself under the thumb of her pushy classmate Erika. As if Tsubomi's new environment wasn't bewildering enough, the fairies she saw in her dream appear in real life! They implore her to become a legendary PreCure warrior and make the Heart Flowers in people bloom.

30min. 48eps. 2011 Hibiki and Kanade—two junior high school girls who have known each other since they were children—tend to argue more and more as they grow up. One day, Hummy, a magical fairy from the musical country Majorland comes to look for the legendary warriors called PreCure. When the two girls become aware of the danger, they become PreCure! 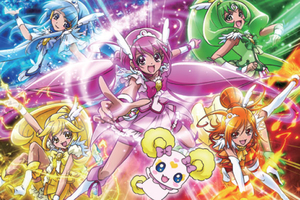 30min. 48eps. 2012 Candy, a fairy from Märchenland follows the shining light that leads to the five legendary PreCure warriors in order to fight Bad End Kingdom villains who are trying to vanquish the entire world to the “Worst Ending.” 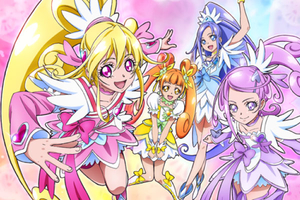 30min. 49eps. 2013 Thanks to Sharuru, a fairy from the Trump Kingdom, and the power of mysterious accessories called Cure Lovies, Mana transforms into Cure Heart! Mana, her close friend Rikka, her high-class childhood friend Alice, and the enigmatic, cool super idol singer Makoto all become legendary saviors. Together, they purify the Jikochu, who have forgotten about love! 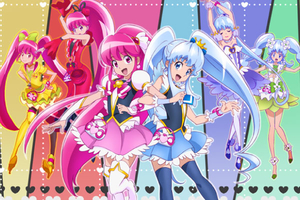 30min. 49eps. 2014 In the 10th anniversary of the PreCure franchise, Blue Sky Kingdom is ruled by an evil organization and its princess, Hime escapes to Japan. Earth’s god, Blue advisdes Hime to seek out a fellow PreCure. Megumi Aino is chosen and she transforms into Cure Lovely. 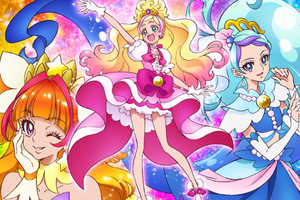 30min. 50eps. 2015 Haruka Haruno, a seventh grader at Noble Academy is given a charm called the Dress Up Key by Kanata. Using that and Princess Perfume, she transforms into Princess PreCure! To become a true princess with strength, kindness and beauty is a Princess PreCure’s mission. 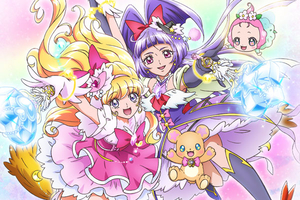 30min. 50eps. 2016 Mirai Asahina, a thirteen-year-old girl who is excited by various things, goes with her stuffed doll Mofurun to investigate a mysterious object that fell from the sky. There, she meets a young magician named Riko who is searching for something known as the Linkle Stone Emerald. 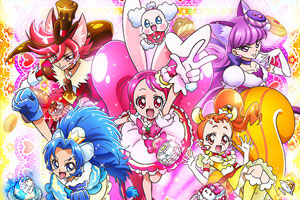 30 min. 32+ eps. 2017 Ichika Usami, a second year middle school student, loves sweets and works in her family’s patisserie. When she encounters a fairy named Pekorin, she learns about a magical energy called “Kirakiraru” that resides in sweets and desserts and the monsters known as Henteko that are out to steal them. Ichika joins five other girls to form KiraKira PreCure and protect the sweets. 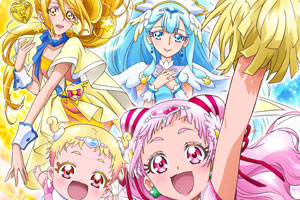 30 min. 49 eps. 2018 Nono Hana is a middle school student who encounters a baby named Hug-tan and her guardian, Harry, who fell from the sky. Hana learns that they have been pursued by the evil Criasu Corporation, who wants Hug-tan's Mirai Crystal and change the present. Protecting Hug-tan causes Hana to gain her own Mirai Crystal and transform into the Pretty Cure of High Spirits, Cure Yell.

30 min. 49 eps. 2019 After an attack on the Starry Sky World by the Notraiders, the twelve Star Princesses turns into the twelve Princess Star Color Pens and are scattered across the universe! Searching for the legendary warriors known as the Pretty Cures, two aliens named Lala and Prunce, along with a mysterious creature named Fuwa, meet Hikaru Hoshina - an imaginative eighth grader - who transforms into a Pretty Cure!

30 min. 45eps. 2020The secret world "Healing Garden" has been healing the Earth. One day, Villains called "Byo-gens" attack Healing Garden with the goal to destroy Earth, which is now in big trouble! In order to save Earth, three "Earth doctor trainee" Healing Animals escape from Healing Garden to look for their partners. Along with them is Rate, the princess of Healing Garden, who holds a special power. When three ordinary girls meet the Healing Animals, they are transformed into Pretty Cures in order to face and defeat the Byo-gens. After Rate runs out of energy when she detects the Byo-gens' attacks, the Pretty Cures work together to protect Rate and everything that lives on the precious planet Earth. Now, let's start the Pretty Cure Operation! 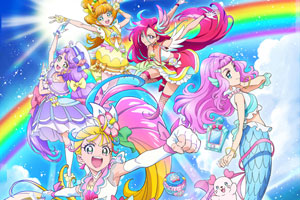 30 min. 20+eps. 2021 (in production)Manatsu Natsuumi is a first-year junior high school student born and raised on a small island. On the day she moves from the island, she meets Laura, a mermaid girl who has come to the earth alone in search of the legendary warrior, Pretty Cure. Laura's hometown, Grand Ocean, is attacked by a witch who lives in the dark depths of the ocean, and all of their motivational power is taken away. It is said that if the motivational power of humans is also taken away, the world will be in deep trouble. Laura is captured by the witch's servant and Manatsu transforms into the Legendary Warrior Pretty Cure, Cure Summer, to save her. 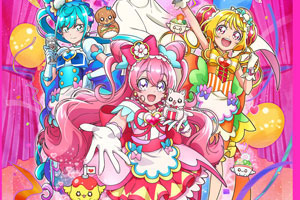 30 min. 5+eps. 2022 (in production)The mysterious, delicious world of CooKingdom, which rules over all the cuisine in this world. CooKingdom has closely guarded the Recipe-Bon, in which it's written how to prepare any dish. But, oh no! One day, it gets stolen by the Bundoru Gang! The Bundoru Gang plans to monopolize everything for themselves, and their next target is the Cuisine Fairy Recipeppi... The Energy Fairies have come to Oishi-Na Town in the human world in search of the Recipe-Bon. With their help, an unexpected turn of events leads to three ordinary girls transforming into Pretty Cures! They stand up to the Bundoru Gang, to recover the Recipe-Bon, and to protect everyone's delicious smiles!

FRESH PRECURE THE MOVIE!
SECRETS OF THE TOY KINGDOM!

DOKIDOKI! PRECURE THE MOVIE
MEMORIES FOR THE FUTURE

PRECURE ALL STARS DX
CALLING ALL FRIENDS☆
THE MIRACLE UNION

PRECURE ALL STARS DX2
RAY OF HOPE☆SAVE THE RAINBOW JEWEL

PRECURE ALL STARS DX3
RAINBOW FLOWER TO THE FUTURE 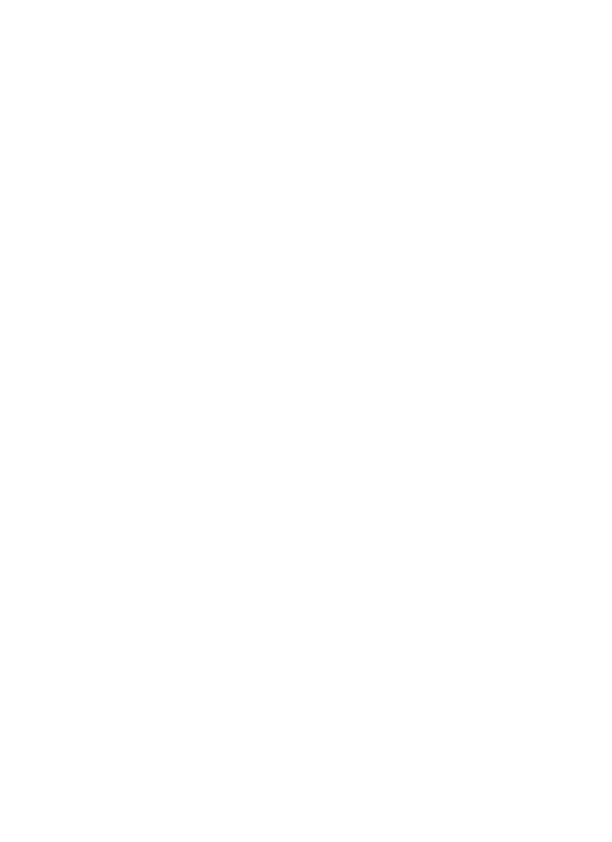